Together We Stand Stronger

April 01, 2019
Two years ago, I met a young lady at a function organized by my temple. While chatting with her, I told her about my school and the Teacher's Training college I run on my campus. Before I knew it, she had enrolled for the course and over a short period of time, we became good friends. She was actively following my posts about all the work I had been doing for various social causes. She became very interested in the sanitary pads project and approached me to showcase the project to people from our community, during the seventy five years in existence celebration at the East Africa Satsang Swaminarayan Temple.
I met the fund raising committee of the temple to explain the details of my reusable sanitary pads project as well as the dry foods collection project. Fortunately it was approved quickly and we started working on the finer details of our plan.
One Sunday was demarcated for my speech, when the temple attendance would be maximum, ensuring that we could reach a large number of women. I had to get statistical details of the project from AMREF Kenya Health Africa,an international NGO,  who is spear heading this initiative. Then I had to translate all the information into my native language, Kutchi- Gujarathi. Then I had to stand up and speak in front of an audience of approximately two thousand people. To my surprise, I started receiving some cash donations immediately and a lady who works for a garment factory, offered to stitch many pads for us free of cost! 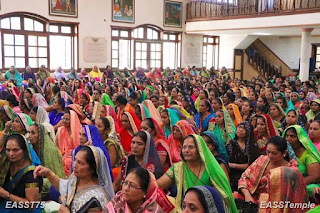 The Temple committee and the AMREF Committee came together to plan for the event in order to make it really successful.
For some reason or the other I did not have any pad samples in hand right up to a day before the event and in desperation I turned to my neighbour who is an experienced seamstress, to quickly make a cloth pad sample. She did not let me down, we worked until late that night and then I had a prototype to show at the temple the next morning! 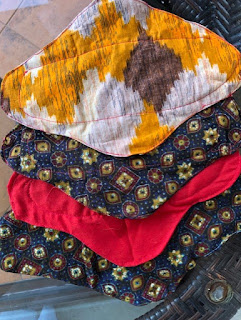 The main day of the temple celebration dawned and the friend who had originally mooted the idea, supported me throughout the weekend, helping to set up the stall and to explain to everyone who was interested what the project was all about. She took great care of me and ensured I ate and stayed hydrated whenever we had some time in between events.... 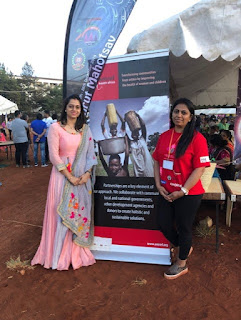 My support system throughout.... 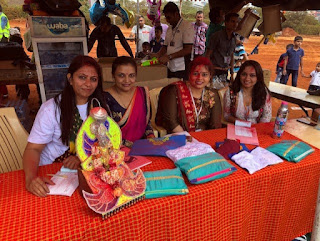 We were fortunate to receive blessings from Maharaj Shree

Enthusiasm to donate was at an all time high and the youngest donor was eight years old! Instead of buying her favourite food from one of the stalls, she came and donated that money for the cause. Each donated whatever they could spare , showing us that they had very large hearts. And everyone was genuinely interested in the project and asked us lots of questions about the needs of the girls, the annual requirement of pads and even technical questions about the manufacture of the pads. 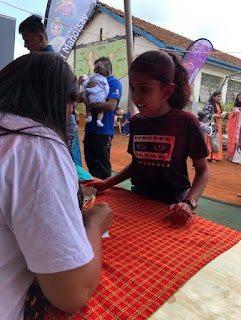 
Various women's organizations liked the idea and approached me to start a similar project with their groups too. The stall saw a steady rush of people and we managed to create a lot of awareness about the needs of different groups of people. The event was super successful and even a few committee members wholeheartedly supported the fund raising initiative. 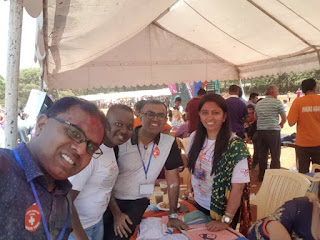 We ended the event by celebrating Holi, the Indian Festival of colours, which heralds Spring and signifies new beginnings, just like we would be doing in the lives of many people with the help of the generous funds we had raised that day..... 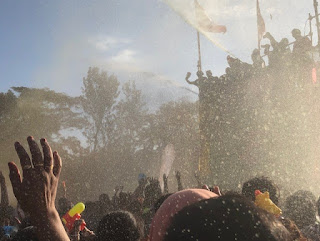 Popular posts from this blog

All In A Day's Work: Fund Raising, Surgeries, Pad Making, Body Awareness, Saying NO To FGM! 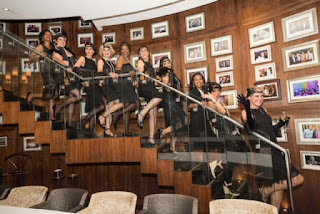 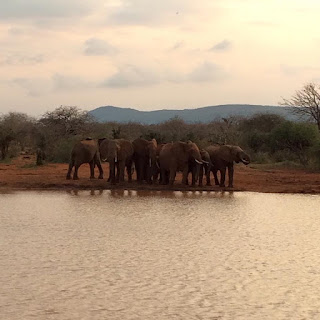 The Tsavo Tale: Aruna's Story Of A Walk With Rangers And An Encounter With Poachers.                                                   Only Elephants Should Wear Ivory We see a different Africa, a luxurious one, ensconced in tents in five star resorts, devouring international cuisine and going on safaris in top of the line safari vans. And then, one day, I met Aruna Varsani, who had taken on the challenge of venturing into a different part of Africa, the one we had only heard about, felt sad about and seen pictures of…I was shaken  to the core when I heard Aruna’s Tsavo story and looked at her detailed pictures. I began by asking Aruna the motivation behind undertaking such a unique adventure. She candidly revealed that she wanted to come out of her comfort zone (very similar to the one I am currently wallowing in) and that she wanted to volunteer to do her bit towards elephants who are poached for ivory. She wanted to interact with the people on ground, th
Read more